In the face of the refugee influx in Germany, you can currently observe a lively debate between people expressing skepticism all the way to right extremist opinions regarding the  refugees and those welcoming refugees. And it seems as if the German people are waiting for somebody to speak up, so they can support them.

24 Hours ago, two young TV starts Joko&Klaas (known for the show “Circus Halligalli, in which they send eachother around the world to do crazy and funny dares) published a video on Youtube, stressing how important it is to speak up against Nazi sentiments. They address the video directly to those people who have expressed antagonizing sentiments against the refugees or openly supported the nationalistic attacks. They tell them very clearly and boldly that they do not want any of them to watch their shows anymore, that refugees are welcome and that they condemn any attacks on refugees.

With the headline of the video “Das wird man wohl noch sagen dürfen” which is a very commonly used expression meaning “people should be allowed to say this”, they intend to give many people a taste of their own medicine. During the past several weeks, many people started arguments against refugees by saying “I am not a Nazi, but…” or “One should be allowed to say that…” only to make a point that exactly resonated with nationalistic thinking.

Joko & Klaas have posted their video on Youtube, tweeted about it, posted it on Facebook. After 24 hours, the video has almost 2Million viewers, it received received 53,000 thumbs up, 2500thumbs down and there are currently 7000comments on Youtube.  It was already shared more than 75,000times on facebook and their hashtag #mundaufmachen is among the most trending Twitter Hashtags currently.

Two aspects of this viral phenomenon are worth mentioning:

(1) The strong social media support for this video shows that people are willing and eager to speak up in order to welcome the refugees and oppose any nationalistic sentiments.

I have downloaded this morning’s tweets that were produced from 05.30 – 09.30am (Central European Time). Unfortunately, Twitter limits the amount of tweets downloadable for analysis, so I ended up with roughly 2000 Tweets that contained the hashtag #mundaufmachen. Those tweets have an outreach of in total 70Million Followers. In this network you can see that people not only share the link to the video and the hashtag, they also address Joko&Klaas directly. A rough look through the content of the tweets suggests that the tweets are overwhelmingly supportive of the video.

This is how a Twitter network looks like. Every dot is a tweet. A circle around the dot means that people just tweeted something with the hashtag #mundaufmachen. If there is a line, they addressed someone, using @. The read dot is Klaas’ twitter account, showing how many people addressed Klaas in their tweets. 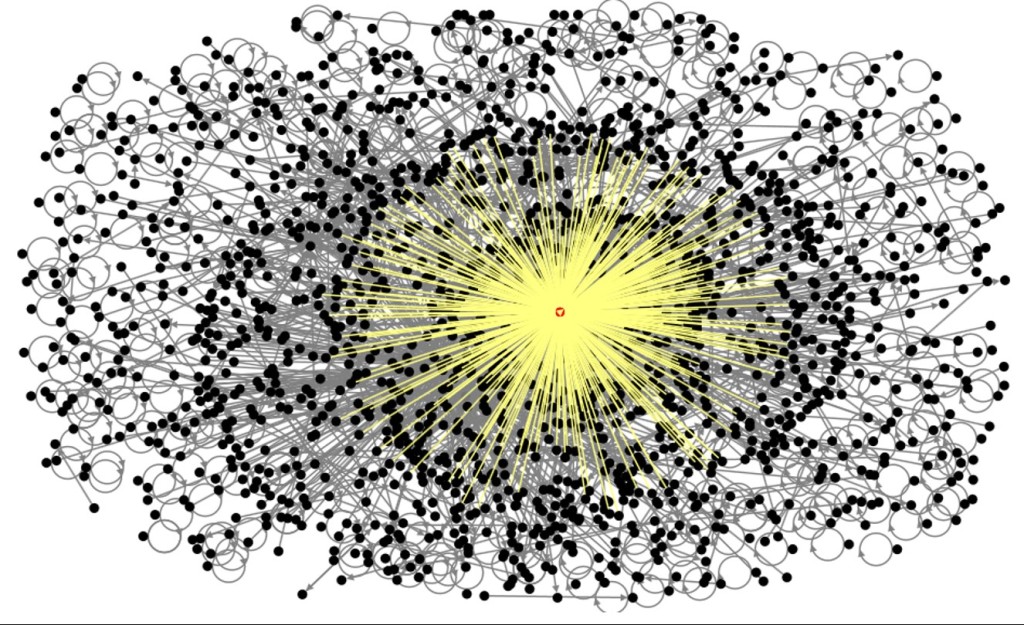 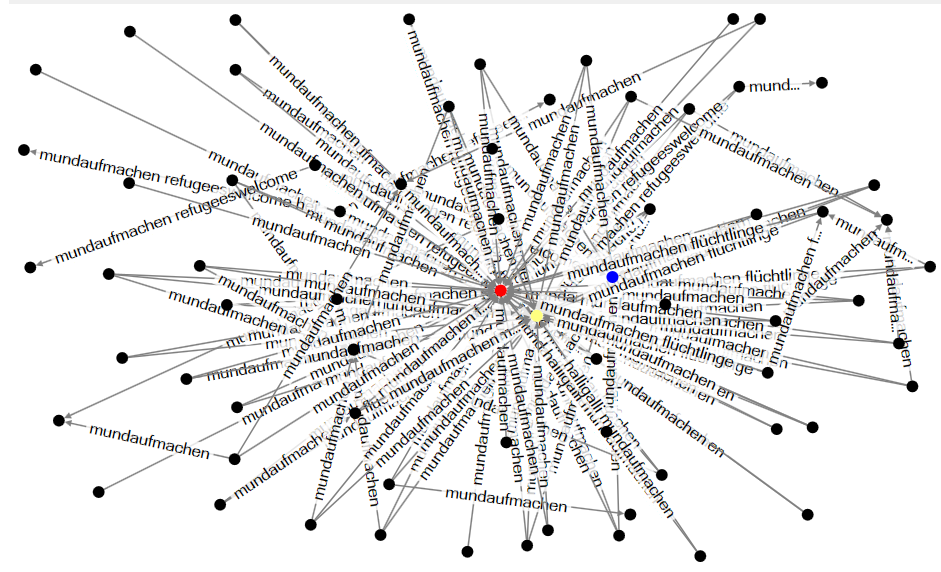 This graph is showing all those tweets that were directed at Joko or Klaas or their show’s account Halligalli and that were sent by people that have more than 1000 Followers. The most common hashtags that were used besides #mundaufmachen were #refugeeswelcome and #heidenau (which is the name of the small town where nationalists attacked a refugee camp).

(2) Whenever there is a nationalistic comment about this video, people are speaking up in favor of it. Even if the tone is not always the right one, social media channels serve as a platform for many people to express themselves without too much effort.