On October 3rd, Germany celebrates the 25th anniversary of Germany’s reunification. The newspaper “BILD”, equivalent to FOX news in terms of scandalizing, biased reporting and manipulating, has the highest circulation of any newspaper in Germany. On a hot topic day, they print 12 million papers. Today, in their “Happy Birthday, Germany” edition, the car manufacturer Volkswagen played an unusually prominent role: The company appeared on the first page, and occupied two full page-ads that I would like to explain to an international audience. 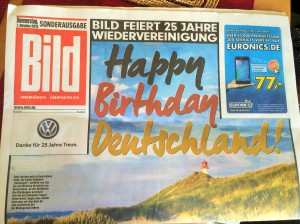 Front Page: Directly underneath BILD’s logo, there is a Volkswagen ad, saying: “Thank you for 25 years of faith”. Being a marketing professional, the location of this ad almost had me thinking whether this was a corporate publishing coup initiated by VW in partnership with BILD. 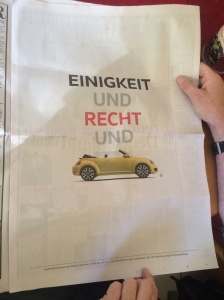 To put this into the right context: “Unity and Justice and Freedom for the German Fatherland” is the first verse of Germany’s national anthem. There is a lot of room for interpretation of this ad. My first idea was that by substituting the word freedom with the VW beetle, they intend to say that VW has been the company who’s brought an affordable car to German households. You may also derive at the interpretation that as much as these values belong to Germany, so does the Volkswagen, which means “the people’s car”. 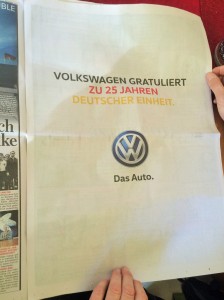 What do I make out of this? The story of Volkswagen is a German story. While it is great that the company portrays its happiness about the country’s reunification that prominently, the question that remains is whether VW had planned this very expensive birthday card before or after the emissions scandal. In addition to that, no other traditional German company has placed birthday wishes in the paper and there are a couple of international companies with German roots like Bosch or Siemens.

I come from a town that hosts the second largest Volkswagen plant in Germany. Many of my former school mates now work at the company. In the German language, there is an special way of expressing the identification with an employer. When asked who they work for, people don’t respond “I work for Volkswagen”, they respond “I am Volkswagen”. This region truly is Volkswagen, the local government’s prosperity and almost every sports team’s sponsoring depends on the VW.

To me personally, VW has been the manufacturer of a car for a person that does not need to show off. Comparing the claims of the biggest German car manufacturers underlines this brand image. From BMW claiming Happiness (“Freude am Fahren”) or Mercedes stating The best or nothing (“Das beste oder nichts”) to Audi promising Advancement through technology (“Vorsrpung durch Technik”), VW simply offers the car (“Das Auto”).

Not knowing about VW’s intentions to place these ads in this morning’s BILD paper, to me this presents a very bold move that is not in accordance with its humble brand image. I am curious about your thoughts!

In the face of the refugee influx in Germany, you can currently observe a lively debate between people expressing skepticism all the way to right extremist opinions regarding the  refugees and those welcoming refugees. And it seems as if the German people are waiting for somebody to speak up, so they can support them.

24 Hours ago, two young TV starts Joko&Klaas (known for the show “Circus Halligalli, in which they send eachother around the world to do crazy and funny dares) published a video on Youtube, stressing how important it is to speak up against Nazi sentiments. They address the video directly to those people who have expressed antagonizing sentiments against the refugees or openly supported the nationalistic attacks. They tell them very clearly and boldly that they do not want any of them to watch their shows anymore, that refugees are welcome and that they condemn any attacks on refugees.

With the headline of the video “Das wird man wohl noch sagen dürfen” which is a very commonly used expression meaning “people should be allowed to say this”, they intend to give many people a taste of their own medicine. During the past several weeks, many people started arguments against refugees by saying “I am not a Nazi, but…” or “One should be allowed to say that…” only to make a point that exactly resonated with nationalistic thinking.

Joko & Klaas have posted their video on Youtube, tweeted about it, posted it on Facebook. After 24 hours, the video has almost 2Million viewers, it received received 53,000 thumbs up, 2500thumbs down and there are currently 7000comments on Youtube.  It was already shared more than 75,000times on facebook and their hashtag #mundaufmachen is among the most trending Twitter Hashtags currently.

Two aspects of this viral phenomenon are worth mentioning:

(1) The strong social media support for this video shows that people are willing and eager to speak up in order to welcome the refugees and oppose any nationalistic sentiments.

I have downloaded this morning’s tweets that were produced from 05.30 – 09.30am (Central European Time). Unfortunately, Twitter limits the amount of tweets downloadable for analysis, so I ended up with roughly 2000 Tweets that contained the hashtag #mundaufmachen. Those tweets have an outreach of in total 70Million Followers. In this network you can see that people not only share the link to the video and the hashtag, they also address Joko&Klaas directly. A rough look through the content of the tweets suggests that the tweets are overwhelmingly supportive of the video.

This is how a Twitter network looks like. Every dot is a tweet. A circle around the dot means that people just tweeted something with the hashtag #mundaufmachen. If there is a line, they addressed someone, using @. The read dot is Klaas’ twitter account, showing how many people addressed Klaas in their tweets. 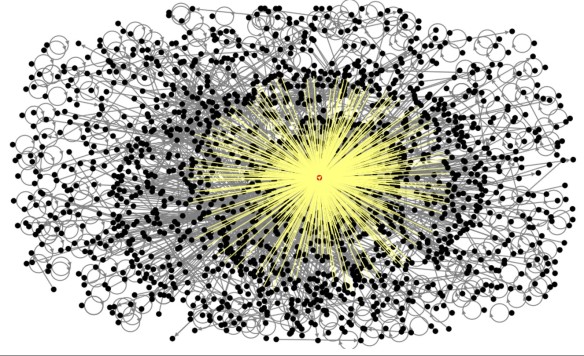 This graph is showing all those tweets that were directed at Joko or Klaas or their show’s account Halligalli and that were sent by people that have more than 1000 Followers. The most common hashtags that were used besides #mundaufmachen were #refugeeswelcome and #heidenau (which is the name of the small town where nationalists attacked a refugee camp).

(2) Whenever there is a nationalistic comment about this video, people are speaking up in favor of it. Even if the tone is not always the right one, social media channels serve as a platform for many people to express themselves without too much effort.

*** ATTENTION: Shameless self-marketing *** In September, I published my first article for the Konrad-Adenauer-Foundation’s blog. It asked why there is no Silicon Valley in Europe and was also published in the Huffington Post. However, when I told my non-German-speaking … Continue reading →